The Impact of the All Babies Program on Vaccination Coverage

Small cash incentives doubled the percentage of infants who were fully immunized, among other positive impacts.

Vaccination is one of the most cost-effective public health interventions in the world (Rémy, Zöllner, and Heckmann, 2015), but childhood routine vaccination rates are persistently low in some areas of the world, including northern Nigeria. New Incentives developed the All Babies program in response to a body of evidence that conditional cash transfers can improve health behavior (see, for example, Bastagli et. al., 2015), evidence that small incentives can significantly increase vaccination rates (see Banerjee et al., 2010), as well as other behavioral science research on the power of small incentives (see examples). Altogether, the research suggested that small cash incentives could be an extremely cost-effective way to increase vaccination rates in areas where rates are low, but a randomized evaluation had not been conducted on this exact model or in the context of northern Nigeria. Therefore, before scaling up, New Incentives, with support from GiveWell, had its model rigorously tested with a randomized controlled trial.

Researchers with IDinsight and Hanovia Limited conducted a cluster randomized control trial from July 2017 - February 2020 to measure the impact of New Incentives' All Babies program on coverage for routine childhood vaccines in North West, Nigeria. The study took place across 167 clinics in Katsina, Zamfara, and Jigawa States.

Clinics were screened by New Incentives prior to the baseline survey to ensure they met our operational requirements. The research team then selected clinics to include in the evaluation, ensuring a minimum distance of 17km between pairs of study clinics. The 167 clinics selected were then randomly allocated to either receive the program or comprise a control group for the duration of the study.  The All Babies program began in 2017 and was fully operational by July 2018.

Data was collected from caregivers of 5,173 children aged 12 to 16 months. To measure vaccination rates, the research team used caregivers’ reports of their child’s vaccination status (self-reported data) and cross-checked the reports against health cards with immunization records (e.g., child health cards, campaign cards, etc.) and immunization registers at the clinics.

The study found that the program doubled the percentage of infants between 12 and 16 months of age who were fully immunized, increasing coverage from roughly a quarter to just over half of all infants.

The study also found that the program had improved the timeliness (within 1 month) of the measles vaccine, optimizing the protection of the vaccine. Additionally, program clinics were more likely to report no or rare stockouts than control clinics, suggesting that the program’s impact may go beyond stimulating vaccine demand to also improve access to vaccines.

These findings ultimately mean that more children are protected from vaccine-preventable diseases and the threat they pose to life. 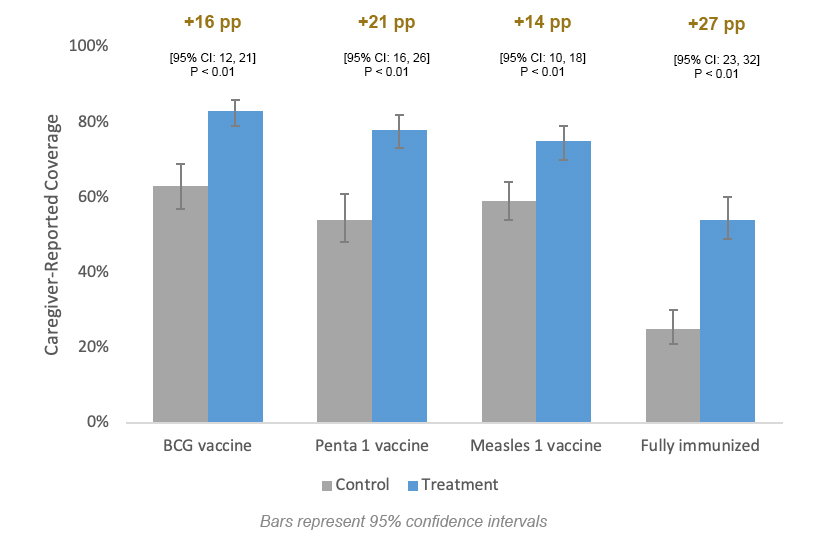 The program also had positive effects on other immunization and health outcomes, such as first-time visits to health clinics and coverage for other vaccinations that are part of the Nigerian routine immunization schedule. Caregivers in the areas where the program operates also had better knowledge of and more favorable attitudes toward immunization as compared to their counterparts not receiving the program. These are promising signs that the All Babies program can help increase demand for routine immunization in the long term, though future research will be needed to confirm this.